Morgan Hill, also known as Morgan Hill, is a city in Santa Clara County, California. It was established on November 10, 1906. Originally centered on the homes of nearby farmers, farmers and orchard farmers, it expanded and evolved into a high-tech industrial satellite town in Silicon Valley. According to the 2010 US census, the city has a population of 37,882. 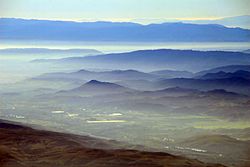 A View of Urban Area and Farmland from Nearby Mountain

Morgan Hill is located in the southeastern part of the San Francisco Bay Area, about 39 kilometers southeast of the center of San Jose, about 21 kilometers northwest of Gilroy, about 24 kilometers west of the Pacific coast and Santa Cruz in the southwest. The city is located in the south of the Santa Clara Valley, about 107 meters above sea level. There are no naturally formed lakes and rivers in the urban area. The city is near the seismic belt and is an earthquake-prone area.

The city's climate is affected by the Pacific and belongs to the Mediterranean climate. The annual temperature range is between 0.9°C (33.6°F) and 32.3°C (90.2°F). The annual precipitation is about 480mm. The summer climate is extremely dry, with more rainfall in winter but little snow. In summer, fog is more common. At about 10 p.m., fog from the Gulf will float over the city, and gradually disperse around 10 a.m. the next day. In winter, showers are more likely. The area's topography is not suitable for tornado production, and there is less thunderstorm or storm weather. The Mediterranean climate here makes some tropical plants, such as palm trees, suitable for growth here.

Pacific Watt supplies gas and electricity to the city.

The city has a public high school and community college, while some students attend private schools in San Jose, such as the Valley Christian School.

There is a small private airport 6 kilometers south of the city. Civil flights can take to San Jose International Airport, 39 kilometers away.